Another feather in the Chola’s cap is the great King Rajendra Chola. He is none other than the son of Rajaraja Chola. Just like his ancestors, Rajendra was very successful in the battles that he fought and ferreted his enemies. He along with his army vanquished his enemies and bought home his exemplary war trophies. 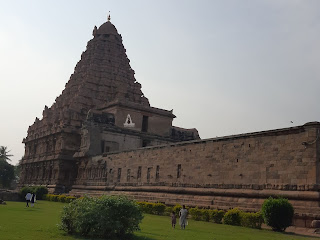 Being a Chola helped Rajendra’s growth in the already organized administration, powerful bureaucracy, strong army and the naval force. He emerged as any other victorious Chola King.

Before ascending the throne Rajendra ‘s war with the Ganga Clan, Nolambas, Tulu, Konkans, Kodavas, Telugu speaking region, and also the Chera country made his enemies incapacitated.  Rajendra Chola was the only king to be abundantly blessed by Vijayalakshmi as well as Durga which is evident from his back to back success over different regions.

Apart from being victorious, Rajendra’s war trophies made him stand out. His attraction towards victory is synonymous as he got the idols of Mahishasura Mardini from his war expeditions. It is not just Rajendra, but all his ancestors worshipped this fierce form of Durga before going for a war.

During the first ten years of his rule, he displayed his courage and valor in the wars that he fought. In the 11th Century Rajendra’s army defeated Kings from the North and reached the banks of the river Ganges and the army was made to carry the holy water in golden pots to the new capital Gangaikonda Cholapuram. In fact the title Gangaikonda Cholan refers to the King who brought the holy Ganges to the South.

The  war trophies are placed in various places in and around Gangaikonda Cholapuram. The main temple at Gangaikonda Cholapuram shelters few of the important war trophies of Rajendra. A Sowrapeedam from the Nolambas is a beautiful artefact. Scholars assign it as a creation of 9th century. A lotus like shape spreaded over a square platform, Ashta-Dik-Palakas adorning in each corner while Arunan drive the chariot of Lord Surya which has seven horses. This is one of the sculpturally richest depiction of Suryapeedam.

The Mahamandapam of the Gangaikonda Cholapuram temple shelters a Durga from Nolambas, Lord Surya (standing posture) from the Chalukyas and another significant sculpture of Saraswati from the Palas (placed right in front of the main Shrine of lord Shiva). Other than this, the Nandi in the Amman shrine on the northern side of the temple, twenty handed Mahishasuramardini from the Chalukyas enshrined separately are the notable war trophies within the temple complex.

Now coming back to the small villages around the Gangaikonda Cholapuram temple, the next closest war trophy Mahishasura Mardini is sheltered and worshipped under a huge tree in the Reddy Street. It is saddening to see such artefacts of historic significance being maintained in a poor state. The next war trophy is the Mahishasura Mardini of Manmalai. This sculpture resembles the craftsmanship of the Guptas, probably from the Madhya Pradesh region.

Another sculpture of Chalukyas Mahishasura Mardini is placed in an Azhagar temple in a village called Saluppai which is five kilometers to the north of the Gangaikonda Cholapuram temple.

Thiruloki is a small village located near the Thirupanandhal temple and is 20 kms from the Gangaikonda Cholapuram Temple. Thiruloki has two important Shiva temples which give important historic information through its inscription. Thiruloki is also a derived name from Trilokya Maadevi Chaturvedi Mangalam, which was in existence from the period of Rajaraja I, since it is named after one of his wives.

Apart from being patronized by both father and son duo both the temples in this village hold a special place after the Rajendra’s Ganges expedition. Scholars say that Rajendra Chola brought the waters of Ganges to this temple in the first place and then took the holy water from here to the new capital. Also the Sundareswarar temple shelters two beautiful war trophies. One is the Rishabhaarudar, exquisitely sculpted in a single stone.  Lord Shiva and Parvati seated on a pedestal with a decorative arch mounted on the back of the Nandi. This beautiful creation is said to be of Nolamba’s craftsmanship. Another is the gorgeous sculpture of the Rathi Manmadhan, which is under worship can be found in the Mahamandapam of the temple. Dr. Kudavyil Balasubramanian says that this sculpture is of Lord Kartikeya and Deivanai from the North. Whether this is Lord Kartikeya or Manmadan, this is completely unique and artistically elegant.

Apart from all these sculptures, there are some more war trophies that were brought from various parts of the ancient Indian kingdoms. 45 pillars from the Nolambas (Some part of Karnataka and Andhra Pradesh) were used to build the corridor around the Then-Kailayam Shrine at the Thiruvaiyaru Temple. There is a Gangaikonda Vinayagar from the Palas being worshipped at the Nageswaran Temple of Kumbakonam. Pala dynasty’s Natrajar at the temple of Melakadambur and Durga of Kollampudur are also the part of victory trophies that were brought into the Chola kingdom.

All these war trophies speaks the value of the great success that Rajendra has achieved and further purifying his capital with the holy waters of the Ganges. Some of these beautiful sculptures are under worship which somehow are safeguarded in a way, but few other important sculptures are in bad conditions. One should definitely pay a visit to all these war trophies in order to experience the pride that Rajendra would have had when he brought all those to his kingdom. It was overwhelming for me to personally visit those trophies. I sincerely hope this blog post motivates the reader to at least go visit one of the war trophies of Rajendra The Great.

Raghu Ram
East Gaterr is a blogspot about the heritage and culture of the sacred land Bharath, by Raghuram. I completed PG Diploma in Heritage Studies from INTACH and PG Diploma in Journalism from Bhartiya Vidya Bhavan - New Delhi. I am, now pursuing MA in Museology from National Museum Institute. I learn and explore various heritage site in and around Tamil Nadu. I focus to explore more of the indigenous heritage. I am currently working on various projects like heritage listing of Thanjavur, cultural mapping of Kumbakonam and various others. I conduct guided heritage tours in the "Cultural Heartland of Tamil Nadu - Thanjavur" occasionally. I focus on historically significant lesser known or unexplored heritage sites.